Before white men settled in Grundy County, it was occupied as a hunting ground by tribes of Sac, Sioux, and Pottawottomie Indians. No obtainable record or tradition exists of a permanent settlement being made until 1833, when General W. P. THOMPSON settled near the Grand River. Among the first settlers in the vicinity of the present site of Trenton were: James R. MERRILL, Samuel BENSON, John THRAILKILL, Levi MOORE, William COCHRAN, Jewett NORRIS, John SCOTT, and Daniel DeVAUL, plus the PERRY, GRUBB, and METCALF families. 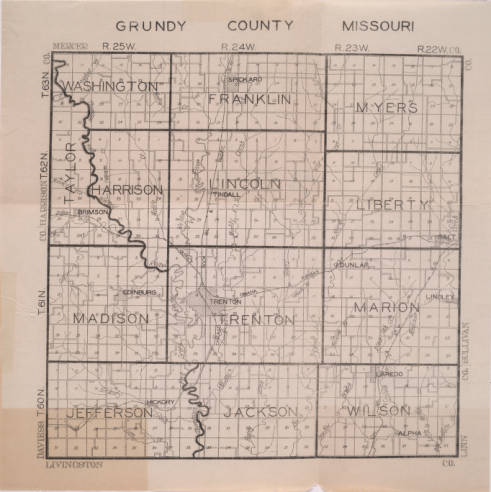 View a map of Grundy County

Search Surnames and Searchers 1998 , a publication of the Grundy County Genealogical Society; has links from surnames to persons researching that surname!

search for Grundy County Records in the MO State Archives

Grundy County has both a Genealogical Society and a Historical Society.

Visit the Grundy County Genealogical Society homepage   and join us!

The History of Wilson Township

"They rode the Orphan Trains" the last of which arrived in Trenton in 1929.

Edinburg School, 1901 - 1902 listing pupils, Board of Education members, and teacher

Photos of Unidentified Grundy County Folks Can you identify any?  Update! One photo has been identified!

Photos of SPROUT family members Provided by Natalie Huntley. Please send her email if you can add any information about these photos.

HUDSON family in Grundy County Can you provide any additional information about this family?

MAXSON family in Grundy County Two individuals have handwritten "Ben" and "Lula" on the photo. Can you provide any additional information about this family?

Newspaper Photos from Trenton (and one from the Kansas City Star).

Search Surnames from all queries below

Note: your message will appear not to have anything written in the body - that's OK! If your mailer requires a subject, put "Subscribe"; otherwise leave it blank. You will receive a "welcome" message once your subscription takes effect (usually one minute).

In July and August of 1996, a group of genealogists organized the Missouri Comprehensive Genealogy Database. The idea was to provide a single entry point for all counties in Missouri, where collected databases would be stored. In addition, the databases would be indexed and cross-linked, so that even if an individual were found in more than one county, they could be located in the index.

At the same time, volunteers were found who were willing to coordinate the collection of databases and generally oversee the contents of the web page.

Alicia Roy's Grundy County (& other) surnames and several photos of the Laredo, MO area.
(use your BACK button to return to this page)

MOGenWeb and Other Missouri Links

US and World GenWeb Links

Search for surnames and genealogical sites at Lines & Lineage

- includes Common Threads and I Found It!